An Addition to Maslow's Hierarchy of Needs

This entry is all about potential.  I read a very interesting story by some rogue philosopher who dramatized a meeting with "God".  The whole thing is about the vast potential of a species when they manipulate their environment.  Those who simply adapt, the articule explains, are merely surviving and not aspiring to be something greater.  The paper talks about "we" a lot.  I'm not the biggest group person - in the sense that I, at THIS moment, value the individual more than I do the system in which he finds himself.  A collective, though, is a very comforting concept as it infers a certain amount of security with a group of people who exist for, or are merely operating at this time toward, a certain goal.  With these two things in mind - the ultimate potential and the collective - I propose a change to Maslow's Hierarchy of Needs.
Originally, Maslow's pyramid looks like this: 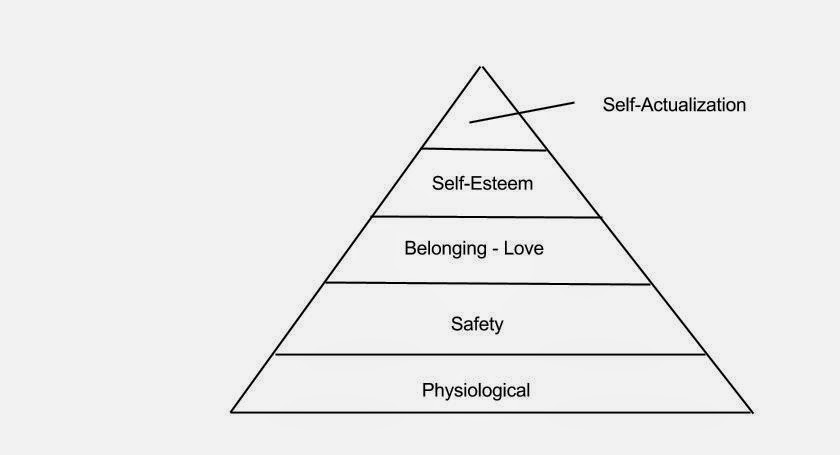 But I think that a small change can be made in order to show the philosopher's point.
If we assume that Maslow's original model is correct (though I'm pretty sure that quantitative research is inconclusive on that point), when we're assuming that these needs are met from the foundation to the top, with it being stated fact that one cannot achieve self-actualization without their physiological needs met.  So, if we also assume that ultimate potential is met by these individuals becoming part of a combined collective, would it not be appropriate to place an attachment onto the top of the pyramid?
Before I draw the graphic, I would like to mention that, so far, I have not come up with sections for the additional attachment.  Here it is: I think that this picture accurately portrays the fact that the "collective" is based on the individual.  Without an individual, nothing would get done - innovation, invention, or ground-breaking creative research would not occur, ultimately stagnating the species and leading them to a quiet extinction.  Because such a hive mindset would come from individuals from this model, it actually bases off of the idea of self-actualization.  That being said, would this ever happen?  Probably not.  In order for such a theory to occur, there would have to be a mass of self-actualized individuals who would life society to heights not before experienced.  Because there aren't many self-actualized individuals (and by all accounts, self-actualized people would probably not have the interest for such an over-all regime shift).
Perhaps, due to that last parenthetical phrase, I should define my own definition of self-actualized.  For me, a self-actualized individual exhibits, obviously, none of the needs/has his needs fulfilled.  He understands himself, or at least has the potential to fully understand his own actions, emotions, and thoughts due to a lack of background noise.  It occurs to me that everything from Maslow's Hierarchy is external to the individual.  Everything on that model can be done to him, be accepted by him without necessary intrinsic thought or action.  It almost seems that this model allows thought only when a person meets the self-actualized level.  Does this mean that one out of a thousand people can truly think for themselves?
Posted by Dan Rhodes at 12:37 PM No comments: 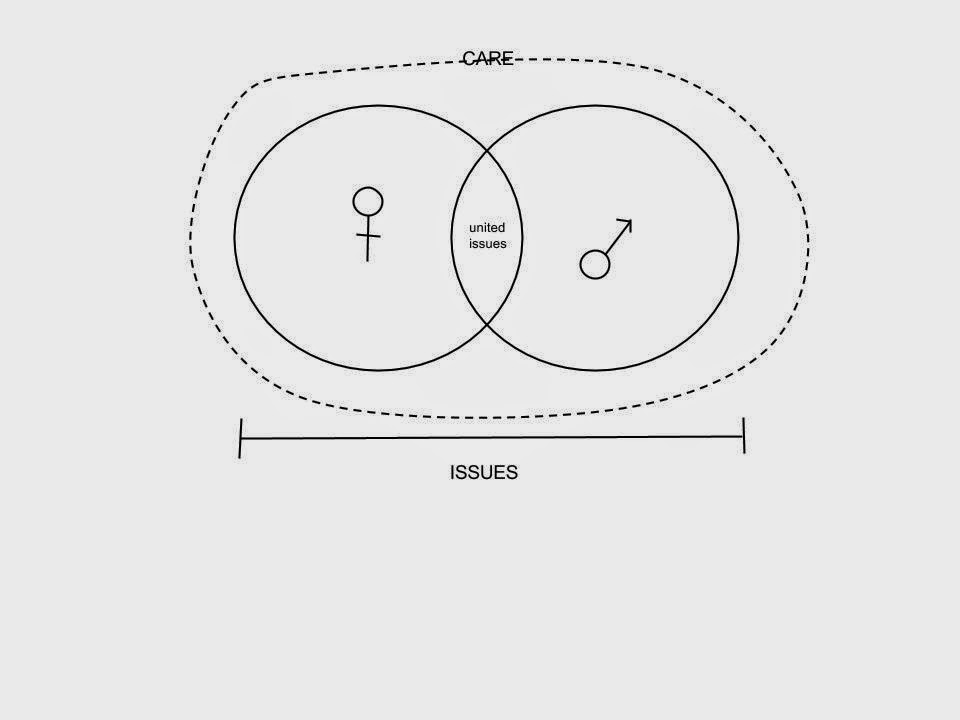 This Venn diagram shows my current thoughts on a healthy relationship.  The people in this relationship are heterosexual only because it is what I have personally experienced.  This shows the people as having issues that they deal with.  A nod to existential psychotherapy is here because I believe that we all do die a lone and must deal with the majority of our issues alone, as well.  That being said, some are very much a responsibility of both people and should thus be decided together.  But, as said, the majority of issues are singular as can be seen by the amount of space outside of the "united issues" field.  While it may seem rather callous that I mentioned that most decisions should be made by the individual, that does not mean that the other should not be concerned with personally-made decisions.  A net of "care" is around each person.  This, however, does NOT mean that outrageous inquiries shoudl be made into personal decisions.  Trust is key here.
Posted by Dan Rhodes at 9:48 AM No comments: