The Most Important Letter in Psychotherapy

I remember sitting in one of my classes early this year and hearing my professor begin many of his interventions with "Gee."  As in: "Gee, I wonder why you're feeling that way, " or, "Gee, do you maybe think that Sandra feels differently than you?" This brought me to the conclusion that G is the most important letter in the alphabet in psychotherapy.
Posted by Dan Rhodes at 9:12 PM No comments:

A Continuum of Psychotherapeutic Theories

One of my professors, William Casile, showed our Group Therapy class a really interesting graphic depicting different psychotherapeutic theories on an x and y plane.  I am going to present it quickly and take it a step further.  The x axis portrays the continuum of objective versus subjective theories.  Said another way, this axis shows the theories' views on reality.  Is reality a construct of the individual (subjective) or is there a distinct and cohesive reality that everyone is part of (objective)?  The y axis's continuum attempts to discern between an empirically-based theory and an experiential/growth-related non-empirical theory.  The former is capable of experiment or correlation, while the latter is less data-oriented and therefore less able to be quantified for a journal or publication. 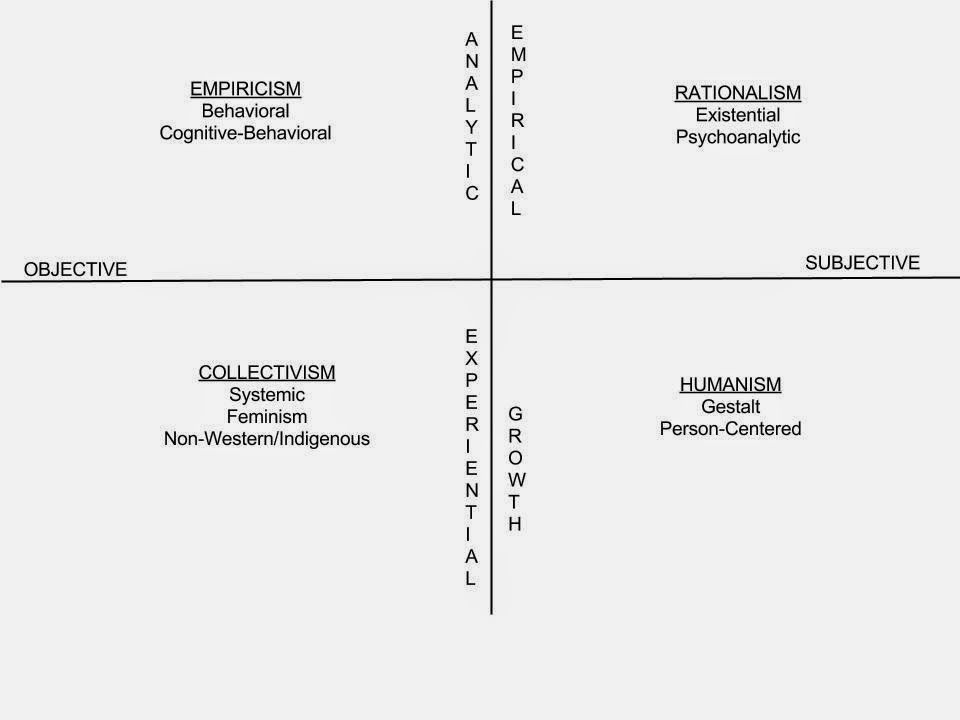 Where empirical methods and subjective methods cross, existentialism and psychoanalysis result.  Should existentialism be here?  I don't like, first of all, that existentialism is organized with psychoanalysis.  More importantly, it is hard for me to believe that existential psychotherapy is easier to research than Rogers' common factors (as Yalom's book on group psychotherapy can attest).  That being said, I think that Casile, being an existentialist himself, knows better than I on this one.  This area's title is Rationalism.  This could possibly be because these two orientations are the deepest, most roots-based approaches.  But rational?  The use of psychoanalytic metaphor is one of the less rational approaches I know (not necessarily saying it's false - metaphor can be a powerful thing).
Humanism is the convergence of experiential and subjective.  Humanism is all about the client.  But not only.  Humanism is also all about the therapist.  While growth and personal reality are important in the client's life, I think that it is just as important to the therapist.  I think that the best and perhaps most vocal of experiential proponents was Carl Whitaker who always wanted the client to act as his therapist.  I think that everything in the Humanism category is also more feelings-based than its polar opposite, Empiricism.  Experiential models are inherently more about affect anyway.
Empiricism is more the polar opposite of Humanism.  It does not dwell on emotions, but rather on behaviors or cognitions.  Both behaviorism and cognitive-behavioral therapy are testaments to that.  They are both the most empirical theories to date.  They also espouse a relationship that is one of teacher and student.  The client is actually being taught how to cope better or become more active in their own lives.  This teaching underscores the "correctness of reality" that its place on the x axis denotes.
I can't say that I know much about the last category.  My program does not intensely teach the more collectivist theories (outside systems-based family approaches).  I honestly don't think that systems theories should be in this model at all.  It seems to me that systems and multicultural competencies are better used as a z axis.  What to call such as axis?  At this point, I do not know.  Perhaps later I will find a phrase that rolls off the tongue eloquently enough to sit somewhere beside such an educational model.
Posted by Dan Rhodes at 9:04 PM No comments:

More Thoughts on a Unified Theory

Upon further thought about some kind of Unified Theory, I have realized a major flaw in the logic of the primary idea.  To create some kind of non-varied theory, that would, in essence, require 1) an agreement among professionals and 2) a change from theory to process/fact.  The latter point is distressing because we would be changing a theoretical construct (something that can be further developed or altered) and change it into a globally-accepted idea.  If something is accepted by everyone to such a degree, it becomes de facto fact.
People are not the same!  Sure, some theories have shown empirically better results than other, but those results are most likely pulling mostly within two standard deviations of the mean.  There are always outliers.  To use such a Unified Theory would leave these individuals out in the cold and would staunch further development by professionals.  Sure, there would be fringe development, but such action would be seen as para-science by professionals and would include only minor numbers, decreasing its academic potency.
This is not to say that a therapist-based theory is not worthwhile to cultivate (keeping in mind that it would not function for all clients).  Instead, I think that it is of great import for any therapist to understand their own core methodology with room to alter for fringe cases.
Posted by Dan Rhodes at 3:32 PM No comments: