It's my opinion that every counselor worth their salt should read and understand the seminal work (especially in their favorite theory).  While some counselors only subscribe to certain theories (I'll most likely post about counseling learning models later), I think a more general view is better.  Without getting too much into the weeds as to why I think that a more differentiated seminal theory education is better, here is my list of books every competent counselor should read:

These are just a few titles to get a good prospective therapist started.  I will update this post when I think of another worthy seminal book.
Posted by Dan Rhodes at 11:10 PM No comments:

A New Model of Counseling Education

I've had a thought about another article that I could write that has to do with a different way to go about counselor education than the current model.  At first, this thought was hatched when I figured that every student of psychotherapy should have to write a seminal theory paper.  I later realized that this might not be wholly feasible.  At the least, it is worth it to at least think about their own method of therapy in an in-depth manner.
My method looks like a cupcake.  The main base of my method is a classical knowledge of psychotherapy by way of the seminal literature on the topic.  This should be required of the student by the professors and administration, but also be the responsibility (mainly) of the student.  I've written about some of the more seminal articles before.  Some include (but are not limited to):
- Irvin Yalom's Existential Psychotherapy
- Sigmund Freud's psychoanalysis (many different readings)
- Glasser's Reality Therapy
- Rogers's Client-Centered Therapy
- Beck's Cognitive Behavior Therapy: Basics and Beyond
- Ellis's A Guide to Rational Living
- Skinner's On Behaviorism
These are some of the foundation books that describe the very roots of therapy.
These texts not only give prospective therapists the knowledge they need in order to be competent therapists, they also provide a rich historical view on the subject.  I think that, though most people spurn him and his ideas (which were wholly appropriate for his time period), Freud and his followers (which are all of us, really) need to be understood as to their connections with one another ant heir link to that-day culture. 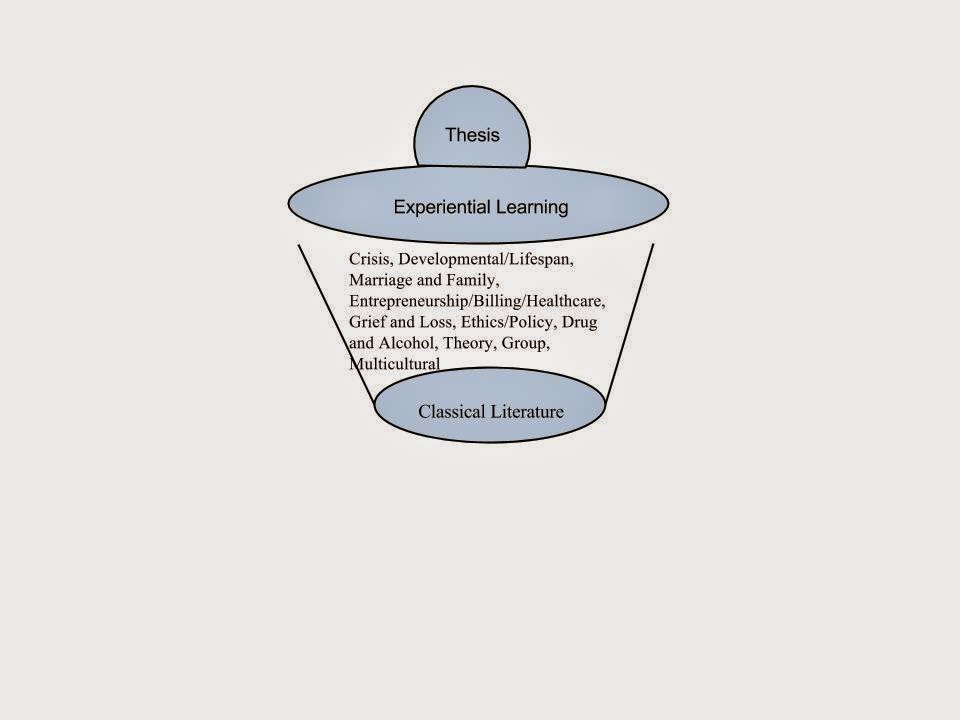 Classical literature learning should really be in the hands of the student.  I think that this must be tempered in some way by a professor.  Who knows that wild conclusions a new student would come to without the correction of a competent professional!  At the same time, it might be good to have unguided learning in abstract theory.      Professors/professionals really come back into the equation when we talk about venues.  I take venues to mean avenues to apply the theoretical knowledge learned in the previously-read books.  the above figure shows these venues.  I think that my way of going about things would allow students to learn more about specific venues per the time they spend in class.  These venues include (but, again, are not limited to):
1. Crisis
2. Multicultural counseling
3. Ethics/Policy
4. Entrepreneurship/Billing/Healthcare
5. Marriage and Family
6. Drug and Alcohol
7. Group Therapy
8. Developmental/Lifespan
9. Grief/Loss
10. Interviewing techniques and postmodernism
These could also be seen as specialties, but I hesitate to call them such because that word makes me think that they should be off-shoot "majors" or programs, which they very well might be able to be.  They are simply more specific avenues through which a practitioner can apply their theory.
_________________________________________________________________________________

It seems to me that Counselor Education programs are under-respected when compared to other Master's or even PhD programs.  I'm trying to figure out why this is.  Could it be the accreditation process yield a curriculum that does not produce enough graduates of proper scholastic mind?  Could it be that the students are not ready or even qualified or disciplined enough to gain the amount of knowledge that is expected of them and is relational to other institutions?  There are definitely other reasons for this, including lack of research and availability of the professor/student.
To a degree, I posit a degree for students who are there to do the work.  When I look around the classroom, I do not see movers and shakers.  I see middle-of-the-heap quasi-professionals.  To a degree, I understand that not every school can have programs that raise a student to the highest level.  But should not all schools aspire to a higher plane of academia?
I posit that we create more barriers to entry for incoming students.  I don't think that students of questionable academic merit should even be accepted (this would also lead to lesser attrition down the road) into the program.  Counselor Education programs, in my opinion, should include both research and experiential learning.  As an added factor, some kind of thesis or end-of-term project should be required.  The amount of research that this model prescribes is prohibitive to the lazy student.

Going off my previous discussion about required classical reading, I forgot to mention a very valuable resource.  The American Psychological Association has a very comprehensive monograph collection of different theories.  While these are not seminal articles from the theorist who originally thought of it, the authors tend to be modern experts in those fields.  I am unsure of the number of these monographs.

Moving on, after the classical literature understanding is delved into (which could be one class really . . . maybe one semester . . . worth 6-9 credits?), and on the post about venues, experiential learning is the next key portion of the model I am writing about.  Whereas the classical literature portion is more student-based (though the class would most likely discuss the theories read at home, which involves a professor) and the venues portion of the academic projection involves a professor-led educational experience, the experiential section is student-led, but professor-observed.  I think that supervision is an amazing and integral part of the education experience.  It allows experienced or practiced professionals to share their knowledge in a hands-on environment.  Supervision is obviously done during practicum/internship.  I would actually suggest one of two things (or both) when it comes to these.  The first is more time spent in the field.  It is hard to argue, I think, against more time participating in the craft.  The second is to spend time in more varied sites.  While classical literature is a good way to point oneself in the direction of a specific type of therapy that a student might be interested in (actually, the venues portion is even more appropriate here) the experiential portion really allows a student to figure out their "specialty," I think that they will eventually be better therapists for it.
The normal (or current) method to complete experiential learning is one practicum and one internship.  As I said before, I think more is better than less.  At some point in this writing, I will write out a semester by semester schedule for this self-designed program.

Here is a very preliminary schedule for 60 credits in my model:


This schedule really pushes that "theorist scholar practitioner" model that I believe I mentioned before.  Normally, three classes per semester would be a good idea.  I think that it wouldn't be too much or too little.  I've split the education (which would take seven semesters or two years and a semester) into three sections to allow faculty and supervisors to cut as needed.  I believe that professors are the gatekeeper and should very closely guard students.
The first level here is very much like candidacy in other programs.  If a student can't hack it through understanding the classical literature and basic interviewing, it is my opinion that they should not continue the program.  I can see the argument that this model starts out pretty quickly.  Classic literature can be quite daunting (especially if the graduate student does not have a background in a psychological studies discipline).  So, with that in mind, I could see a possible switch between semester one and two on this list.  Semester two is very introductive and could (and I stress could, not should) switch with the semester marked one.  I will assume, for the rest of this, that classical literature and interviewing skills/postmodern theories will be done in the first semester.  While my current program (in university) has introductory courses in the things like community mental health, marriage and family therapy, and school counseling (these are actually covered, to a degree (except for the first one) in my model).
The second level expands on the first and really outlines the venues that I mentioned before.  These are curricular-based and allows the student to investigate these specific areas both for concentration purposes and applied core knowledge areas as well as eventual internship opportunities.
The third level is all about experiential learning and research.  This is the time for students to really figure out what they want to do.  The table also mentions that the thesis is a requirement.  It is hard to stress enough that students interested in a degree (and a CACREP-approved final degree) should include not only experiential but academic work.